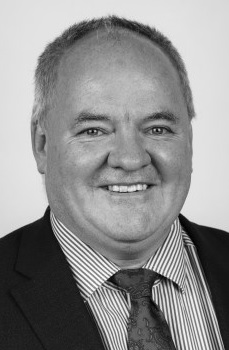 Damian has been principal of Scoil Shinchill, Killeigh, Co.Offaly since 1994. He is a native of the neighbouring parish of Kilcormac-Killoughey. He graduated from Mary Immaculate College, Limerick in 1987 and taught in Scoil Cholmcille, Kells, Co Meath, Scoil Treasa, Donore Avenue and St. Brigid's Castleknock before returning to Offaly to take up his present position.

He is a founder member of IPPN and a current Board member. He has held numerous positions in IPPN, including National Treasurer and for many years, editor of Leadership+. His regular article for the newsletter provides a colourful and insightful perspective on life as a school principal. His articles have been published in principals’ magazines in a number of countries, as well as in the programme for the International Confederation of Principals (ICP) in Toronto.
His play 'A Triumph of Allsorts', based on the events surrounding The 1916 Easter Rising, was produced in several schools across the country in 2016. He had co-responsibility for the development of the Trade Exhibition at the annual IPPN conference for many years. He is currently an advisor with the Leadership Support Helpline and a trained mentor with CSL.

Damian also spent 7 years anchoring a weekend sports show on Midlands 103. He is a keen historian and has been involved in the production of several books in his local area. He is currently on the GAAs History and Commemorations Committee. He has trained many GAA teams in his local club over the years and has served on the Offaly County Board as Children's Officer. He was recently appointed Chairman of his local Kilcormac–Killoughey GAA club.

His wife Marguerite is also a school principal. They have 3 teenage children - Emily, Sarah and Liam.